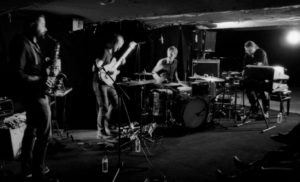 Toc invited Dave Rempis to join the trio in February 2018 for the release concert of “Will Never Play These Songs Again” at the malterie, Lille France. The meeting is instantaneous, the agreement immediate. Could it be otherwise?
The saxophonist is today a Chicago free-jazz figure, after having studied ethnomusicology in Ghana, which is reflected in his Percussion Quartet where his stormy saxophones blow on the embers of untenable rhythms. But it was within the Vandermark 5 that he made his name, before embarking on his own projects such as The Engines, Ballister or the trio he is currently forming with Joshua Abrams and Avreeayl Ra.
Toc like not to define themselves… Tirelessly searching since their creation in 2008 where the practice of improvisation will lead them, the three musicians multiply forms and encounters, like to get lost in aesthetics and styles, disturb the landmarks. As their name seems to indicate, Toc’s members are quite obsessive and even compulsive. Their frenetic, ritualized but non-contagious behaviors bring the listener in a hectic space-time before bringing him back to the mainland in a more or less troubled state.
In addition to their taste for improvisation without barriers or eyes, Toc and Dave Rempis share a communicative energy and power, play the density and the organic and joyful trance.